What is edge detection? 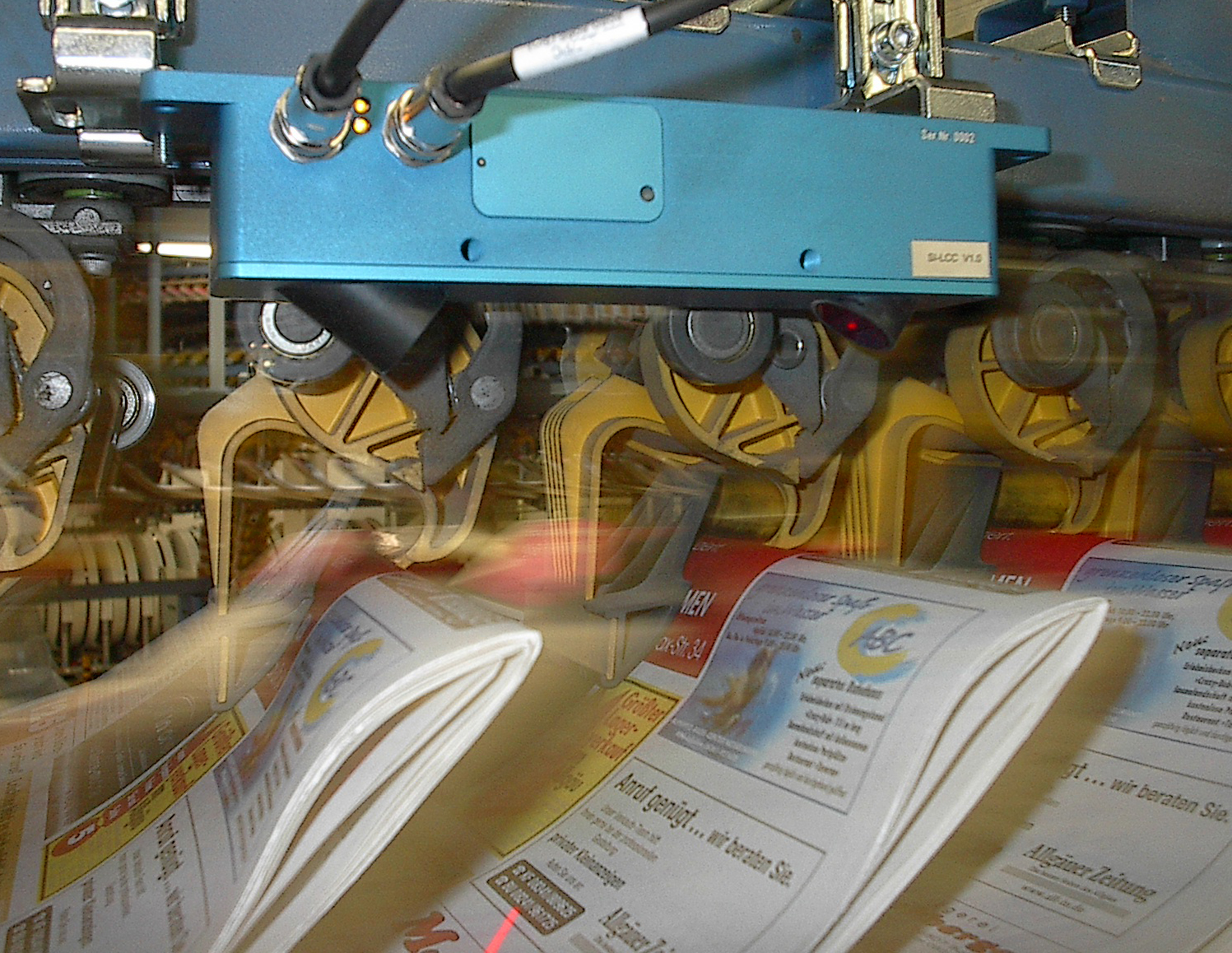 An edge generally is a geometrical discontinuity, for example the start of an object or a sudden height increase of an object. 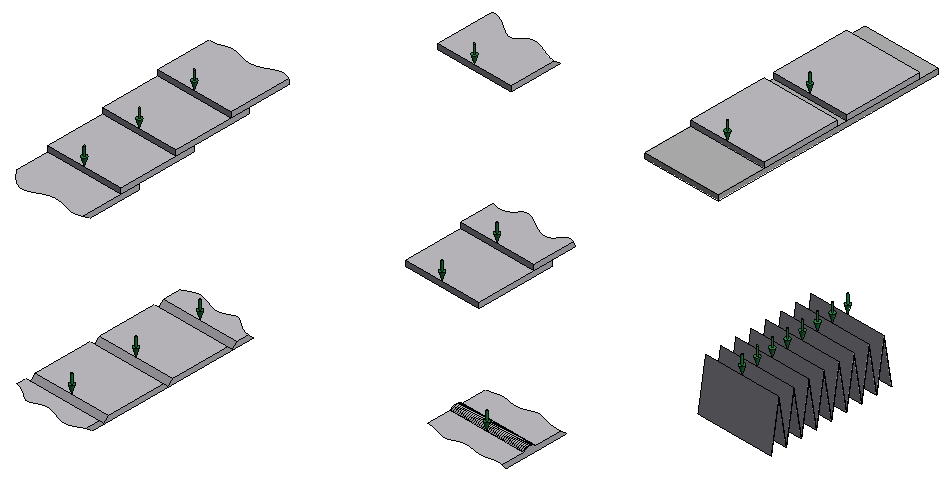 In certain cases the position of an edge must be detected with best possible accuracy, which for example can be done with line sensors (through-beam mode, reflected-light mode  – see L-LAS-TB and L-LAS-RL series) or with 2D or 3D camera systems. If, however, edges must be detected at high speed, or edges must be counted, a completely different principle is used that also is excellently suited in case of large distance variations between edge and sensor. Examples for such applications can be found:

Edge detection according to the triangulation principle

Transmitter, receiver and object are arranged in the form of a triangle. An additional receiver is located at the transmitter side. SI edge detectors us a focused laser diode to ensure a small laser spot at the point of incidence (object). Depending on the properties of the object surface this laser spot is directly or diffusely scattered and also absorbed by the object.

The NORM value is a measurand that in practice is almost independent of brightness fluctuations or color changes of the object surface. So what happens with the NORM value when an edge moves toward the laser spot?

Ι:
At this time the edge still is so far away from the laser spot that laser light influence zone SLB and SLA are not influenced.

IV:
The edge of the object completely interrupts the visual contact of receiver B to the laser spot. SIGNAL B thus approaches zero, and the NORM value also reaches a minimum!

NORM->Ø!
Signal A of receiver A increases slightly, because due to the object edge initially forward scattered light is scattered back and thus partially reaches receiver A.

V:
The edge of the object now has passed the laser spot, and view contact between laser spot and receiver B is established again. The NORM value reaches almost the same value as under I. 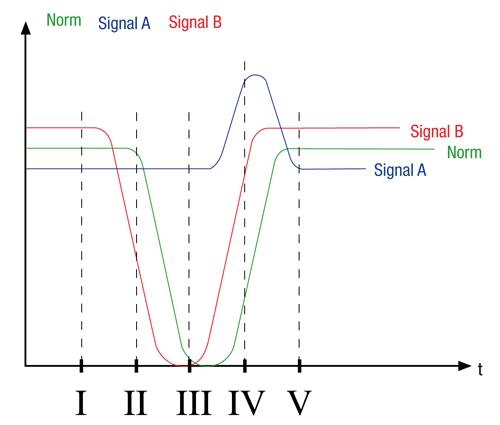 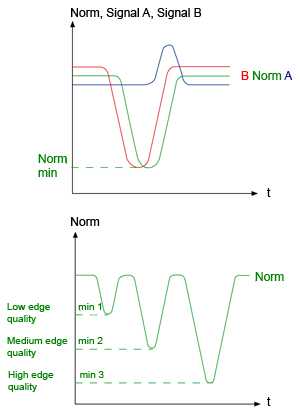 In practice the edges of objects in most cases are not so clearly defined, which is why the NORM value does not reach Ø. The minimum of the NORM value thus is a measure for the "edge quality", i.e. a smaller NORM value means a more clearly defined edge. The edge quality is influenced by the density of the object and by the steepness of the edge.
Since edge detectors mostly are used for the counting of objects, only one signal must be exactly provided for every edge, because otherwise the counting result would be wrong. In addition to reliable edge detection, three additional safety measures have been introduced for this purpose here:
1. Safety measure HYSTERESIS

Edges in practice unfortunately in most cases do not have the ideal step form, an edge rather consists of several edges which in turn may influence the NORM value.

Usually an edge is detected by the sensor's controller when the NORM value falls below a certain threshold THD. When the THD threshold is passed (from high to low) the switching state at the sensor output changes. When the NORM value rises above the threshold again (and there would be no other safety measures), the switching output, as shown in fig. 1a, returns to its initial state.
In figures 1b and 1c the switching threshold is passed several times per edge, which would trigger several pulses.
A second HYST threshold is used to suppress these multiple pulses. The switching process still is triggered by the passing (falling below) of the THD switching threshold. For another pulse to be provided at the output, however, the value must exceed the HYST hysteresis threshold (see fig. 1b, 1c: Switching output with HYST).
2. Safety measure PULSE LENGTHENING

Another safety measure is to lengthen the switching output after a switching process (falling below the THD threshold) by a certain adjustable time interval (e.g. 1 ms, 2 ms, 5 ms, 10 ms).

The dead time is the most important safety measure. The term dead time was introduced because the evaluation software more or less is "put to rest" for a certain time, i.e. no evaluation is performed during this time. The dead time is started when the value falls below the THD switching threshold. In ABSOLUTE mode the length of the dead time is defined by the set time period, in RELATIVE mode by the timed sequence of previous edges. A percentage value of the current timed edge distance can be chosen here.

Basic design of an edge detector

Edge detectors of Sensor Instruments are equipped with a modulated laser diode. An optics unit is used to focus the laser light, so that at the object distance there is a laser spot of approx. 20 µm to 100 µ. With the tested laser light and the interference filter at the receiver side this sensor type is extremely insensitive to extraneous light. The edge detectors are parameterised through an RS-232 interface, using a Windows® user interface. This user interface allows easy and optimal settings because the current NORM values (NORM minima) are displayed graphically. The output provides a digital signal that can be directly evaluated, for example by a PLC. The switching process also is visualised by the integrated yellow LED. 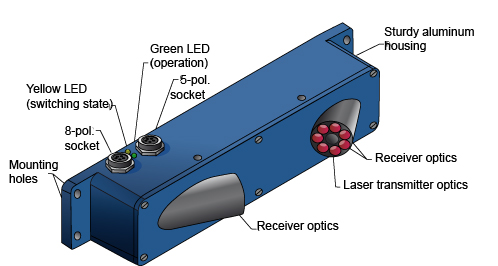 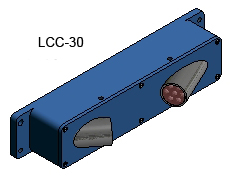 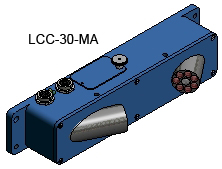 LCC-40, LCC-40-MA and LCC-40-CYL
The LCC-40 and LCC-40-MA types primarily are used for applications with extremely small edges. The sensor for example perfectly detects homogeneous single sheets in imbricated form, starting from a thickness of 40 g/m2, even at high speeds (several m/s). The sensor furthermore is excellently suited for the detection of plastic films (also transparent) in imbricated form. The overlapping position of thin metal colors also can be reliably detected with this type. The sensor has an operating range of 35 mm to 45 mm here. With the MA version the dead time, sensitivity, and pulse length can be set directly at the sensor. 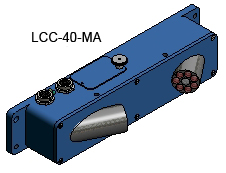 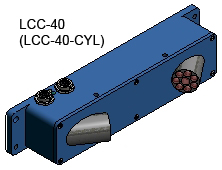 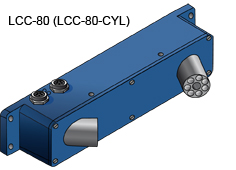 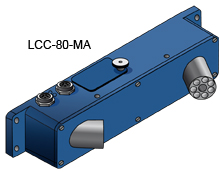 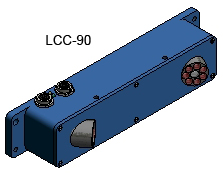 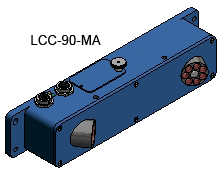 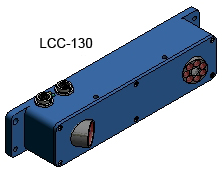 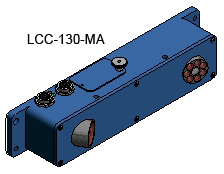 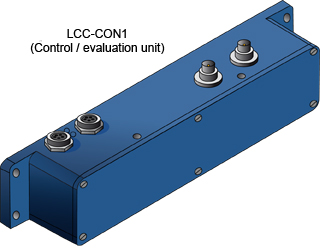 LCC-200 and LBC-200
This sensor features a large operating range of 150 mm to 250 mm. It also is available in a version (LBC-200) that in addition to the digital output also has an analog output (0V…+10V). The sensor thus e.g. can be used for the frequency measurement of rotor blades in turbo chargers or fans. The analog signal is proportional to the frequency of the edges (e.g. edges of rotor blades). 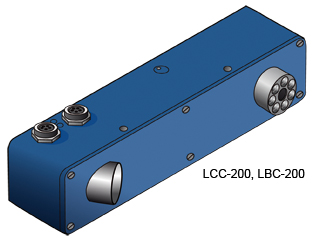 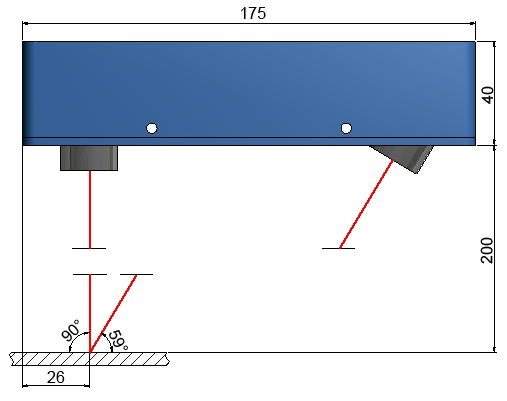 Hardware summary
Which type is best suited for what? 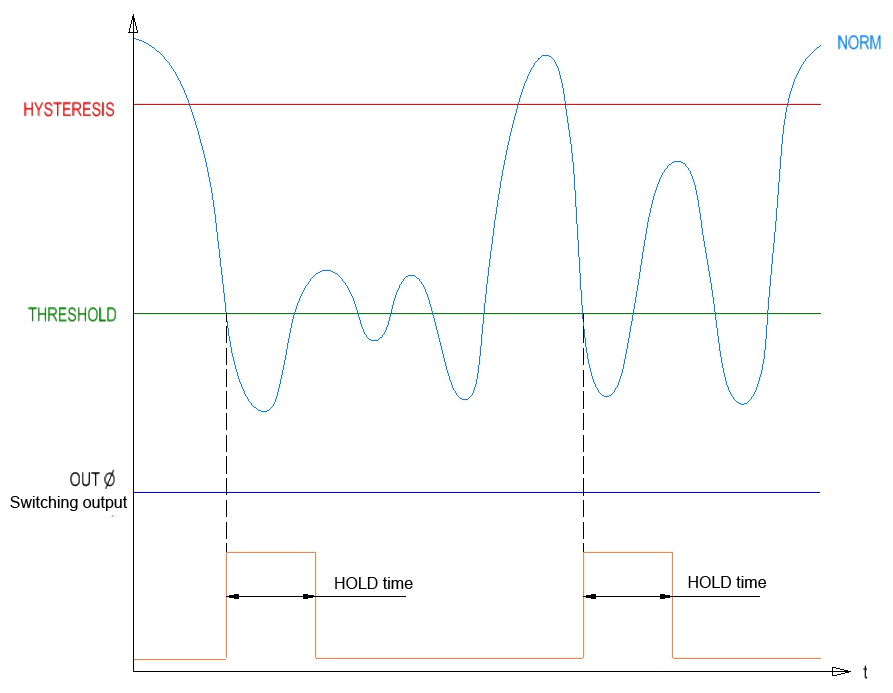 When the NORM value falls below the THRESHOLD value the switching output is activated. At the same time edge detection is deactivated until the HYSTERESIS threshold is exceeded.
THRESHOLD
This input field is used to set the sensitivity of the edge detector. The sensor becomes more insensitive when the threshold is decreased.
HYSTERESIS
A second threshold is used in order to suppress multiple switching after an edge is detected.  The sensor only is activated again when this threshold is exceeded.
TRIGGER: ADJ EXT
To make it easier to find a suitable trigger position, a special chart was introduced in the Windows® user software that can be opened under SOURCE: EXT
SOURCE: EXT
This chart shows the current position of the two trigger input signals ING and IN1, as well as the current edge position. INØ lies at Ø and the following ING-Pub at 100. IN1 should approximately lie at 60, the edge approximately in the middle between INØ and IN1, but approximately at 30.
BACKLIM:
This item is used to set an intensity limit. When the value falls below this limit, edge detection is interrupted (DATØ=signal of receiver A, see *edge detection according to the triangulation principle*)

SOURCE
RAW + the receiver signals A (DATØ) and B (DAT1) are visualised on the graphic user interface. The data also are displayed numerically, together with the NORM value.

A click on GETBUFF displays the last 16 minimum values of the NORM signal (a minimum-value edge) after a detected edge. The THRESHOLD under which the value must fall also is displayed in the graphic window. After a detected edge the software of the sensor during the DEAD TIME and HOLD TIME starts to search for the smallest NORM value (minimum) and holds this value.
With the help of GETBUFF it is thus possible to optimally set the sensitivity threshold that is required for the respective application, which makes sensor setting much easier.